I'll be honest, I have never liked rejection. It sucks. One of the things I'm working on is not taking rejection personally. It's hard!

I spoke at a wonderful conference for women and young women this past weekend. One of the principles I taught them was the the opinions of others are just that--their opinions. Opinions are not truth.

Rejection is often coupled with a palm to the face, or insults, or words like "It's not you, it's me." I can handle other people having negative opinions about me, but when it comes to the next layer of rejection, that's where I struggle.

I experience a wave of rejection just a few weeks ago. The first was an email I received from a blogger that was supposed to review my book back in January. I emailed to inquire if she had read the book and was planning on putting up a review. She said, "I've never gotten through it. What I've read is good but I seem to read a chapter then forget about it."

Ouch. Not even a typical female attempt to soften the blow.

The next day I received word that a speaking group I had hoped to become a part of decided I wasn't "a good fit" for them.

Then, two days later, I was told by a publisher that one of my book ideas was "gimmicky," that they weren't interested in it, and that it would be damaging to my 'brand' to publish it.

I tried to remember the truth that rejection is more about the person (or people, in my case) rejecting than the person being rejected. But, I didn't do a very good job. I cried for a few minutes. (Ok, days, but who's counting?)

I focused on the trifecta of rejection until I began to take their opinions as truths. Maybe I wasn't a good writer or speaker. Maybe I was just a gimmick. The more I thought about it and chewed on it, the more miserable I became.  I mean, what if they were right?

Then I wondered if the friend from the past that called me in January was right. She called, out of the blue, angry. She said she was reading my book, and didn't like it. She then proceeded to tell me I was a terrible person and need therapy. How could I write a book like this because I was such an awful person? She said she'd finish reading my book, but she wouldn't enjoy it. I told her I loved her and I would love to talk with her more about why she felt that way, but she said she wasn't interested. She hung up and unfriended me on FB.

Then, maybe the relative that told me the only reason they spend time with me is because they have to was right. We are too different and they just don't 'get' me.

Then, maybe Tim French from middle school was right when he spit in my face and told me I was gross.

The weight of rejection laid heavily on my heart. The more I though about it, the more I wondered if they were all right. Just maybe.

A few days after I became a pinata of rejection, I talked with my husband about the string, and sting, of rejections. I said, "You know, I feel like I'm trying to do good things and and be a good person, and the very ones that are supposed to be the biggest supporters, the ones who should 'get' it, are not only rejecting me, but being not very kind about it. It hurts."

His response was unexpected and profound. He said, "It sounds very similar to someone else you know and love." It took only a moment for me to understand he meant Jesus Christ. Not that he or I were comparing myself or what I am doing to Him, but my husband's point was this:

Sometimes we focus on how much our Savior understands us--and He does. He has felt every emotion, every sorrow, every pain, every joy, every thing we have felt He has felt. He was perfect love and empathy for us. But, how often to do we focus on understanding how He felt, empathize with Him? In that moment I understood just a sliver of what He must have felt. He was rejected, not just by His enemies, by the very people that should have been His greatest supporters. Family, friends, church members and leaders.

I felt closer to Him, but there were still some lingering doubts. The Savior is perfect. I'm not. What if they were right...even just by a hair?

Then came the second wonderful thing. A few days later I was scheduled to speak to a group of women about the power of doing and becoming. As I spoke the clouds of doubt left and I was lifted and filled once again. It wasn't from the women who came up afterwards and shared their stories with me (though I loved talking to every one of them!), but it was the feeling I had as I taught them.

When truth is taught, God confirms it by the power of the Spirit. If we are listening for it (and sometimes when we are not), we can hear and feel His validation of the things we are being taught or teaching. That morning I spoke about doubt and fear, and having faith in yourself. As I started to speak I felt like an empty well, but as I spoke, God seemed to fill me up with the confirmation that the things I was sharing were indeed true for them, and again true for me.

I say again because I've struggled with rejection in the past and He has helped me feel better--helped me to see once again see myself through His eyes. Not the eyes of the people who don't 'get' me, don't want me, and simply don't like me or what I have to offer, but how He sees me-how I really am. He made me feel good. He's done it in the past, and He's done it once again just last week. 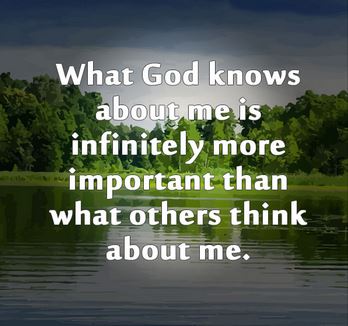 When it comes right down to it, God knows me better than an old friend, a publisher, a speakers group, a blogger. Though they may even have valid points, it doesn't change my worth in God's eyes. It was a difficult, but sweet, reminder to me once again how important it is that we seek His perspective in our lives. I also felt His love for me, and it sweeter than anything I've ever tasted. Even Tollhouse chocolate chip cookie pie. It's that really good.

He also knows you and your worth. If rejection ever has or will come knocking at your door (or email, or phone), I hope you turn to Him. It's easy to get lost in the world of opinions, but He knows more about you that even you do, and His opinion is more important--and more true--than anyone else's.

To me, that's the power of perspective--it can not only help you see the good things in your life, but take the sting out of the negative things. Perspective also gives you the power to direct your eyes, your happiness, and ultimately, your power to where it needs to be--in God and in yourself.

I gave my power over to others for a few days, but I took it back. I don't dwell on the opinions of others. God knows who I am. I know who I am. So, go ahead. Reject me. I'm OK with it.